Saying Goodbye to an Old Friend

I’m sorry to say that the world will be saying goodbye to Mike Babka tomorrow.  I’m also sorry that I can’t be there to pay my last respects to Mike, for respecting Mike, I surely did.  I met Mike on the first day of football practice our freshman year at Morton West High School in 1960.  He was our starting fullback and I blocked for him on the offensive line.  It would be that way for the next four years.  Mike was an imposing figure on the field who liked to run over defenders rather than around them.  He liked to kid me our last two years on varsity as I was a lineman but a few pounds lighter than our quarterback.  He’d say, “How much you weigh today, Ronnie?”  He would laugh when I told him I was still in the 170’s and the QB was still in the 180’s.

Mike was more than a teammate.  He was a good friend and kind of a bigger-than- life party animal who loved to smile, laugh and kid his buddies.  We did party a bit together in those days as well as on camping trips to Wisconsin and at the University of Illinois.  A bunch of us football buddies formed a group called “The Campers’ Alliance” while we were in high school.  We’d go camping up in Wisconsin for a week at the end of the summers, before the grind of football practice began, and a few times in the Spring while there was still snow on the ground.

In 1963 our beloved Chicago Bears found themselves in the NFL championship game (pre-Super Bowls) against the dreaded New York Giants.  My parents took a trip to Dallas for a wedding and I invited the “Alliance” boys over to my apartment to watch the game.  We cooked ourselves a turkey dinner feast, toasted our girlfriends and watched the Bears become NFL champs.  The next year most of us were away in college or other places and decided to gather again (almost all of our gatherings were at the Babka residence) cook the turkey and toast our high school days etc.  That Turkey-cook reunion kept on keeping on every year since.  Although I missed many of the yearly, January Turkey cooks after I left the Chicago area, last January I was able to once again join the group.  It seems to me that Mike was often out of the country at Turkey-cook time too.  I remember once talking to him on the phone with the other guys while the turkey was in the oven.  I think he was in Korea or Japan.  Well, last January both Mike and I made the cook.  He gave me a big Babka grin and handshake and said, “How you doin’, Ronnie?”  Good to be called “Ronnie” as you approach your 68th birthday.  That night we talked a lot about Mike’s travels.  He especially wanted to tell me of his trips to Israel.

I benefited greatly by being the only Jewish kid in our group (or should I say groups).  There was never a negative word or derogatory comment from anyone on the team, in the Campers’ Alliance, or the Turkey-cook group.  As a matter of fact I remember twice when Mike came to my defense.  One occurrence happened in the parking lot behind the Olympic Theater in Cicero and the other on the Lake Michigan beach in Wisconsin.  Specifics escape me, but as I recall someone, not one of our buddies, said something anti-Semitic, or maybe told an offensive joke.  Before I could react, Mike was in their face.  Mike as not shy and retiring, neither was he small.  He was a big barrel of a fullback and when he got in your face, well, he was in your face.  Mike made it very clear that whatever statement was made was out of line and needed to be taken back. He never mentioned that there was a Jewish kid in the group, just that we wouldn't tolerate that prejudice.

Even though Mike and I didn't see much of each other over the years, when we were together, like last winter at the Turkey-cook, it was clear to me that our friendship was still strong.  We’d always reminisce about the times we all gathered in the basement of his parents’ house in Berwyn, the ball games, the camping trips, all of those good times.

I know how difficult these last couple of years have been for Mike and his family.  I send them my deep condolences.  Please know that Mike was loved by his friends and will be missed.  We are all better people for having known him.  He’s in my thoughts and my prayers. 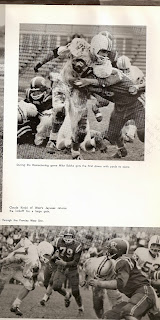