Here’s an interesting story.  It seems that a high school senior’s parents took a trip to Dallas for a wedding leaving him alone in their Chicago apartment.  He, being a member of the football team and enjoying this new-found freedom, proceeded to invite his teammates over for a grand dinner before watching their beloved Chicago Bears play the dreaded New York Giants in the NFL Championship game.  About fourteen seventeen-year-olds gathered in the apartment to cook a turkey, mashed potatoes, corn, stuffing, etc, share some ill-gotten beer, toast the Bears, the bird, and their girlfriends, and cheer the Bears on to victory.

Funny thing was that the next year, when many of the boys were away at college, in the army or working jobs, they decided to reconvene what they loving called “The Turkey Cook.”    With tongues in cheek, the boys recreated the dinner and the toasts (including long lost girlfriends from high school).  Lots of laughs and recent memories.

The tradition of the Turkey Cook lived on over the years.  Last Saturday marked the fiftieth (that’s 50) gathering of those who refer to themselves as “The faithful.”  Right, those seventeen year-old boys are now all sixty-seven years old and the Turkey Cook has been held each year.  I had the distinction (actually a couple of distinctions) of being the originator of the event.  You see, my parents were the ones who left me alone while they traveled to the wedding in Texas.  It was our apartment that I “childproofed” by talking down all the pictures and mirrors to avoid any damage before the boys showed up.  It was my football team and my senior year, and it was 1963.

Last Saturday I traipsed up to the Western suburbs of Chicago through a bit of a snow storm to reunite with my teammates.  What a hoot.  We recalled games, even particular plays in games, proms, parties, old (I do mean old…I’m sure they all are grandmothers now…but they remain seventeen in our minds) girlfriends, coaches, good times and not-so-good times.  Several of the Turkey Cookers served in Viet Nam.  Their stories sound like a Frances Ford Coppula movie.  Several have fought battles with cancer.  There have been divorces but there are also many, many grandchildren (we brag, we smile, we share pictures).

Oh yes, the other distinction.  Our neighborhood on the West side of Chicago was largely Czech and Italian.  Most of the boys were Catholics or Protestants.  I was the only Jew in the bunch.  I was the only Jew on the team.  One might expect stories of rejection, being the outsider; things like that.  No way!  I was their Jewish buddy.  They loved my stories, my friendship, and my difference.  I remember several times when the most popular athletes in the school stood up for me at the slightest drop of a Jewish joke of disparaging remark.  I never had to say a word.  I felt the same last Saturday, fifty years later.  Another thing.  I think the boys like the fact that their Jewish teammate became a rabbi.  Even more special.  At the end of the evening they each left me saying “Shalom.”  I complimented them on their Hebrew.  Smiles all around.

So here’s to the Turkey Cook and a bunch of old friends who love getting together once a year to reminisce, share stories of family, travels, and even talk a little politics.  We raise our glasses to our team, to the Bears, and to twelve smiling faces that almost look like they did back in 1963. 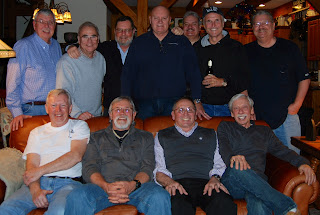