Last night, even though I arrived early, I found the parking lot completely full.  The police waved me on to another lot over a block away.  For a person who patrols the lot at Kroger looking for the closest space, you’d think I would have been upset.  I drove into the lot with over a hundred other cars, walked across a roughly mowed meadow only to find the venue packed.  Standing room only.  I was not upset.  I was inspired.  You see, this wasn’t a Bruce Springsteen concert, or a playoff game at Wrigley Field.  No, this was a gathering at Congregation Sha’are T’fillah in Carmel, Indiana and over 1,000 people showed up.  A gathering of folks showing their support, their solidarity, their concern for members of their faith community attacked over the weekend by Nazi thugs.  A synagogue desecrated with obscene Nazi symbols painted on an outside wall.

We lived in Indianapolis for over thirty-five years, so, of course, I saw a lot of familiar faces in the crowd.  But those in attendance were from all groups in the community.  That’s what was so inspiring.  I expected the Jewish community of Indy to show up.  It was heartwarming to see all the others who cared.  The speakers at the rally last night included rabbis, priests, a mayor, leaders of the Hindu, Muslim, and Buddhist communities.  We heard from the Anti-defamation League, the Jewish Community Relations Council , gay rights groups, Urban League reps.  All said about the same thing.  We will not sit quietly while such hateful acts take place in our community.  The standing room only crowd interrupted each speaker with rounds of applause.

Here in Bloomington Rabbi Sue Silberberg and others resurrected an organization originally formed to combat racism and hate, in response to last year’s Virginia debacle.  Bloomington United is dedicated to countering such racism.  It is a completely diverse organization.  Not a Jewish nor a Christian, black or white, Hispanic or Asian group, but all of the above.  And that’s what I saw last night on the Northside of Indianapolis.  Jews and Christians, Muslims, Hindus, and Buddhists, gays and straights, young and old, people of all colors.  Like the old folk song says, we were “Like a tree that’s standing by the water…we shall not be moved.”

And like John Mellencamp sang, “Ain’t that America.”  I sure hope so. 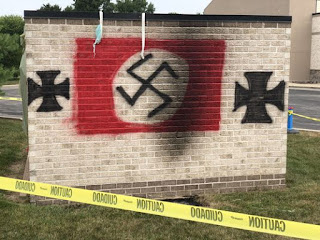